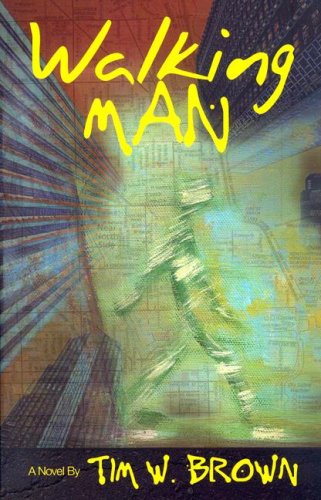 Written as one of those celebrity tell-all biographies, this novel is about Brian Walker, publisher of the zine Walking Man.

Set in Chicago of the late 1980s and early 1990s, Brian seems to have a genetic need to walk everywhere, which he writes about in his zine. He works in the copy room of a downtown law firm, which is a godsend for any zine publisher. He is friends with Tracy Minister, a gorgeous woman who is temping at the firm while she pursues her dream of becoming an actress.

One day, while crossing a downtown street, Brian is already in the crosswalk, when a BMW tries to drive between him and another man also in the crosswalk. In an instinctive reaction, Brian kicks the BMW and dents it. Both men are arrested, then released, and the BMW driver sues Brian for damages. As the case waits for its turn in court, Brian becomes an ardent defender of pedestrians rights, and a national celebrity.

He goes on a national lecture tour, causing the law firm to terminate his employment. Speaking at college campuses, he gets a positive reception, and sells lots of copies of his zine. Later, Brian travels to a national zine conference in San Francisco, where he also gets a generally positive reception. The exception is when another zine publisher publicly accuses Brian of selling out zinedoms guerrilla, do-it-yourself philosophy. Because of Brians fame, he can no longer keep up with the demand for Walking Man. It is now printed by a printing company, the cover is 4-color glossy paper, and there is a (gasp) bar code on the back (the mark of the Antichrist in the zine world).

Meantime, Tracy has gotten an acting job. Its in a local production, and it requires her to be naked on stage. That lasts for a few months, then she gets a job as a Production Assistant on a local TV talk show. Brian freaks out, accusing Tracy of being a sellout; they dont see each other for a while. Does Brian stand up for pedestrians rights by winning his court case (which finally sees the light of day)? Do he and Tracy get back together, and ride off into the proverbial sunset?

Here is a really interesting look inside zine culture; anyone who has ever published a zine will enjoy it. Its also a good story of an average person suddenly thrust into the spotlight.