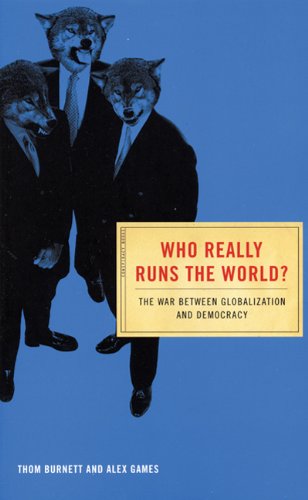 Who Really Runs the World? The War Between Globalization and Democracy, Thom Burnett and Alex Gaines, 2007, ISBN 1932857583


This book examines the conspiracies in present-day life, both hidden and public. It looks at the social networks, corporate alliances and forces of secret history holding them together.

For many years, there has been speculation about secret, shadowy groups who actually control the world. As far as America is concerned, the authors examine groups like Skull and Bones, the Illuminati, the Freemasons and the Bilderberg Group, but none of them really fit as the Group In Charge. According to the authors, a much more plausible place to look is the New York based, and un-secret, Council on Foreign Relations. For most of the 20th Century, it has been the place to go for new administrations to fill their defense and foreign policy jobs.

The book also looks at the role of money in the present day (money really does make the world go round). Americas central bank was founded in the early 1900s by a group of bankers during a very secret meeting at a place called Jekyll Island, Georgia. The new institution was specifically called the Federal Reserve System to get away from the words "central bank." Banking and secrecy seem to go together perfectly. That is part of the reason why governments and corporations move hundreds of billions of dollars around the world at any time, in search of the most favorable tax rates. Sometimes, banks are formed specifically to hide, or finance, illegal activities; two recent examples are BCCI and the Nugan Hand Bank from Australia.

Another avenue for corporations to reinforce their power is through institutions like the International Monetary Fund. It was intended to provide short-term loans to member countries. After the 1980s debt crisis, it now imposes harsh financial conditions on member states alongside its loan packages. It serves Wall Street and wealthy countries; it promotes corporate welfare and has no accountability, and it hurts workers, women and the environment.

This is an excellent book with a lot of information that will not be found in the mainstream media. It is really easy to read, and will certainly keep the reader interested.