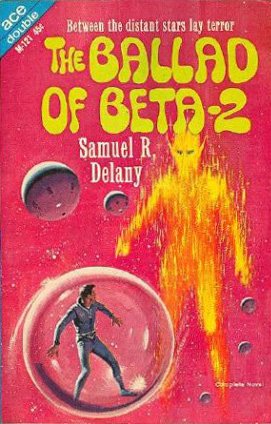 
Here is the story of mankind's first, and unsuccessful, attempt to colonize another planet.

A dozen slow, multi-generation ships were sent to a distant star system called the Leffer System. Soon afterwards, mankind developed a star drive, so that by the time the ships reached their destination, mankind had been traveling around the galaxy for a hundred years. Of the dozen ships, two arrived empty, and two others never arrived at all. The ships were simply parked in orbit, and abandoned. Beta-2, one of the ships, even has its own ballad. Years later, as a college assignment, Joneny, a young researcher, is sent to find out just what happened.

Several of the supposedly indestructible ships show evidence of huge internal explosions. Some old audio recordings talk of being attacked by some sort of green humanoid that communicates by telepathy. Joneny meets the humanoid's half-human son, who is able to exist slightly outside of time, and live in hard vaccuum with no problem at all. He watches video from the other ships where the inhabitants have physically, and mentally, de-evolved to the level of an early human. "The Norm" is taken very seriously on the ships. If a person was found to be outside physical norms in any way, whether it's being too tall, or left-handed, or having the "wrong" eye color, they were immediately executed. By the end, Joneny understands just what The Ballad of Beta-2 is all about.

This is a short novel, but a very good one. It's an interesting story about how things on a multi-generation ship can go very wrong, and it's worth reading.