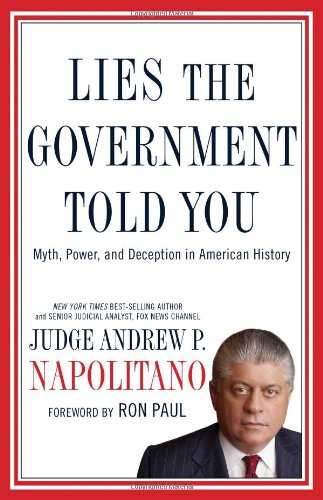 Lies The Government Told You by Judge Andrew P Napolitano is a well written book that pulls no punches. He takes you through some of the most believed lies through the ages and disproves each and every one of them. I wont go through them all here because that would defeat the purpose of getting the book and reading it. However, if you feel that you know the American government, after reading this book, I can tell you that you really dont.

One of the biggest lies told is that Abraham Lincoln fought to end slavery. That isnt quite true. It may be the way your American History teach wants you to think of it, but its not. Did you know that before the Emancipation Proclamation was issued, Lincoln had issued a Preliminary Proclamation on September 22, 1862 that stated that he would abolish slavery in the south if they continued to attempt to secede from the Union. Lincoln only saw abolishing slavery as a means to an end. He did it because he felt that by abolishing slavery in the south, the freed slaves would join the ranks of the Union army to fight against their masters. When the Emancipation Proclamation was released, it only applied to the Southern states. Slavery was not abolished in the north by this action.

Did you know that Thomas Jefferson, a big proponent against slavery in his time had 200 slaves at the time her wrote the famous line All men are created equal? Apparently, he really didnt believe what he wrote. He had proposed many laws in order to free the slaves, yet he didnt do it himself until he passed away. In his will, he had written in to free 5 of his slaves upon his death. Really? 5 out of 200?