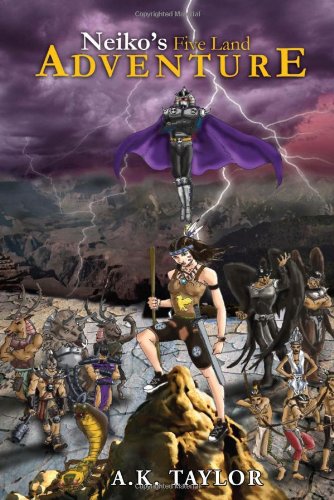 I can’t begin to imagine A. K. Taylor as a young girl writing fascinating fantasy tales like Neiko’s Five Land Adventure (Neiko Adventure Saga Book One). Granted as an adult the author has revised this teen writing project and added the wisdom and balance of being a grown, educated and married woman.

Take a moment and think back to your childhood bedroom. Recall your favorite toys, the ones you played with the most and the ones that caused you some discomfort in the dark. Now imagine your bedroom transformed into a fantasy land were you were called upon to battle for the good and defeat evil between reality and imaginary.

What if you found out those imaginary worlds and the people/creatures in it were real and you became trapped there? Some things you imagined were incorrect. What would you do?

Neiko’s has one foot in reality and the other where she is Captain Neiko Kidd, commanding officer of the Desert Storm Falcons a hidden world that coexists with the known one. These woodland warriors battle with the Crackedskulls and it has to be done before supper.

I always like to share a quote from each book that I review, not to spoil, but to engage. Now imagine yourself back as a teen trying to communicate with your mom and see if it would go something like this:

“Well, here goes nothing,” said Neiko as she walked down the hall. She was trying to measure up what to say to her mother about what happened. She sat down at the table and waited for her mom to hand her dinner. They prayed, and after they finished, Neiko began eating.
“I wonder where your daddy is,” her mom said, trying to break the silence.
“I don’t know, probably got held up at LP again,” Neiko replied with a mouth full of cabbage.
“Is there something on your mind? You’re awfully quiet.”
“Yeah, um—did you hear anything strange—like in my room... like metal hitting the wall or something?”
“No, why?”
“I was just wondering because a couple of strange things happened a few minutes ago.”
“Like what?”
“Well—like...um—I was playing with Ramses, and when he hit the wall he clanged, and then I tried to bring him in the toy box; I missed, and he hit the side and said ‘Ow’.”
“Who is Ramses?”
“One of my toys—the guy with the shiny armor.”
“Amanda,” she groaned in an aggravated manner, then said gently, “Oh—yeah— well... that’s nice, dear.”
“Mom, I ain’t makin’ this up. It really happened.”
“That’s really using your imagination. Did this happen during a battle?”
“No! This wasn’t pretend—this was real. Like in real life,” Neiko stammered.
“Oh, well, that’s a really nice joke—”
“I’m not joking—and I haven’t even laughed about it. If I was joking, then I would be laughing my head off.”
“Has he ever done this before?” “No.”
“Did he come with any special real-life sounds or anything?”
“No, he was just a plain toy. I’ve had him for a long time, and I’ve played with him a million times, and it’s never happened before—never mind, let’s talk about something else.”

The question begs to be answered, would your Mom believe you? What if your real or imaginary friends reveled in the fact that your Mom just didn’t understand.

I encourage teens and young adults to read ‘Neiko's Five Land Adventure’ and learn from a peer that you must have courage and the strength to face the odds and fight for what you believe. Teens will enjoy this book and perhaps it will encourage them to write about their toys and action figures that seem to at times, take on a life of their own.

Author A. K. Taylor created the Map of Hawote/Georgia and the Map of Qari and has been writing and drawing since the age of sixteen. She worked with another artist to create the 23 black and white photos that help bring the story to life IN THE Sixty-five chapters. There are also letters and an amazing log titled “Neiko’s Log” at the end of this book which details, people, places and events. This log will help young readers as this series continues.

For parents: The author grew up in the backwoods of Georgia where she learned hunting and fishing, beekeeping, gardening, archery, shooting, hiking, and has various collections. She has her degree from University of Georgia with a biology degree. I think she is a good role model for teens and young adults.
Theodocia McLean endorses Neiko's Five Land Adventure (The Neiko Adventure Saga Book 1) by A. K. Taylor and encourage teens and young adults to read Neiko's Five Land Adventure (Book One), Escape from Ancient Egypt (Book Two), The Newbie Author's Survival Guide and her latest book title Bloody Klondike Gold. I purchased and reviewed this book from a Kindle format. This review was completed on October 20, 2016.