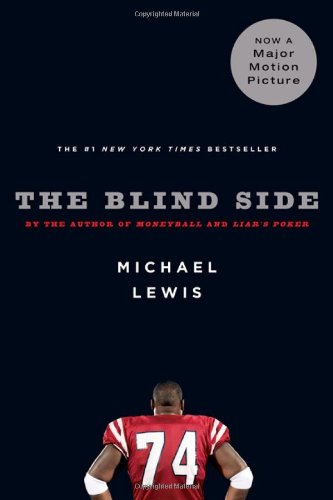 The author of Liars Poker and Moneyball tells the story of Michael Oher, a lost teenager who somehow went from the projects in Memphis (in the nations third-poorest zip code, the author points out) to an evangelical Christian high school in the suburbs.

Despite having no home structure (his mother is believed to have more than 10 kids, although no one is sure) and very little education, the school administrators try to find ways to help him. As the story progresses, hes adopted by a wealthy white family (friends of the author, thats how the book got started) and turns out to have amazing athletic skills.

Although hes 65, 350 pounds, hes as quick and agile as a cat. In the school gym one day (it later turns out he often slept in the gym to avoid the long bus ride back to the projects), a coach tosses him a basketball. Instead of driving to the hoop and dunking, he dribbles between his legs a couple of times, turns around and drains a three-pointer from the corner.

As his new parents bring in tutors to make up for his being ignored for a decade by the public school system, he manages to graduate from high school (barely) and go on to play football (with his tutors in tow) at Ole Miss.

A really uplifting story, and its not over; Oher is a sophomore on the Ole Miss football team, named Second Team All-SEC for the 2006 season. Whenever hes drafted by the NFL, hes likely to make many millions a year protecting a right-handed quarterbacksblind side.