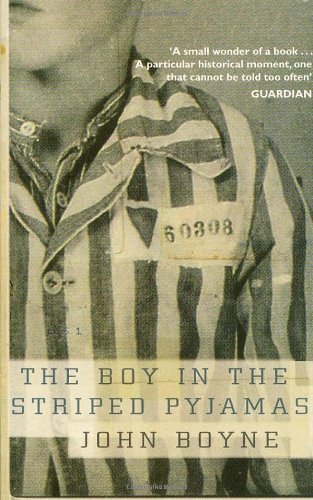 When I sat down to read this book I was not expecting what I got at all. I haven't seen the film yet and never even read the back of the book so had no clue that it was first of all narrated through the eyes of a nine year old boy and secondly that it was one of the best short books I have and will ever read.

The tale is told in such a simple childish form but yet this only helps to strike a deeper chord with the reader as you wonder how much simpler the whole world could be if you left it up to a nine year old boy to run it.

The portrayal of Hitler and the Nazis is startling as seen from the son of a high up official within the army. He looks on his father, as every child does, as a hero who fights on the good side yet he also realises that most of the soldiers that pass through his life are not pleasant people.

When he meets Shmuel who lives on the other side of the fence, although he can sense that all is not right he still feels a childish jealousy at the thought of Shmuel having more people to play with than him. He is astonishingly blind to any wrong-doing and believes there is no difference between himself and Shmuel only that Shmuel gets to play with all the other kids in the camp.

The ending came as a big shock, I was not expecting it at all but I think a brilliant way to wrap up what was an excellent story. A must-read.