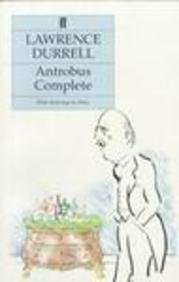 To read Durrell's other writings, you would not think that he had so much of a sense of humour. His novels are pretentious (deservedly so, since he had the talent to get away with it) and you have to understand the man bubbling underneath to find the humour in them.

But with Antrobus he went for out and out comedy in the style of Fawlty Towers or Yes Prime Minister.

The British Diplomatic Corps are our guides here (Durrell served in the diplomatic corps for a while) and give us a first rate tour of politics in a foreign country while maintaining the stiff upper lip. Even if you're floating down the river into hostile territory on a rapidly disintegrating barge with a full load of drunk foreign diplomats, there is protocol to be upheld. As when you are being treated to the Danish Ambassadress' wife delivering 500 lines of Danish poetry all seeming to consist of Oom Kroop Der Poop.

The Complete Antrobus gathers all these episodes and more and the very memory of them can send me into hysterics. Indispensible.