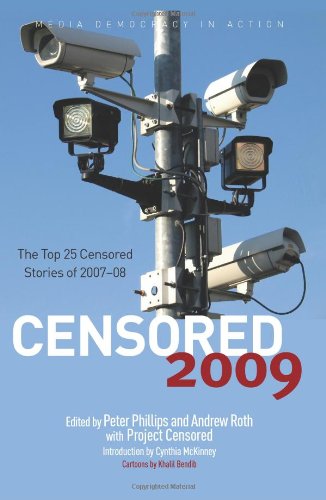 Shows Just How Dumbed Down Us News Media Has Become


Here is another compendium of news stories that were under-reported (or un-reported) by the mainstream news media.

Did you know that over 20,000 private companies are working with the FBI to collect and provide information on other Americans? According to a prestigious british polling group, the civilian death toll in Iraq since the 2003 invasion has topped the 1 million mark. The US Treasury Department now has the authority to seize the assets of anyone who is perceived to, directly or indirectly, threaten US operations in the Middle East (which could mean almost anyone). The American Psychological Association has been complicit in CIA torture. The No Child Left Behind Act has become a huge bonanza in the world of corporate profiteering.

At least nine billion dollars in cash have been unaccounted for since the early days of the Iraq occupation. Today, there are 27 million slaves in the world, more than at any other time in world history. They are not just in the Third World, but also in the developed world. Elliot Spitzer was not removed from office because of "personal indiscretions." He was target of a Wall Street and White House operation to silence an increasingly vocal critic of their handling of what became the present financial crisis.

It seems that there just was not enough air time or newspaper space for these stories, but there was abundant space for Lindsay Lohan, Brad and Angelina, Jessica Simpson, Alec Baldwin and David Hasselhoff. This book also explores the media coverage of the Military Commissions Act, healthcare and the 2008 campaign, American media bias against the lawfully elected Hamas Government in Gaza, the marketing of Gardasil as a "cure" for cancer, when it really isnt, Winter Soldier and the Pentagons targeting of young people (including children).

This is an excellent book that shows just how "dumbed down" American news media has become. It is eye-opening reading and is highly recommended.