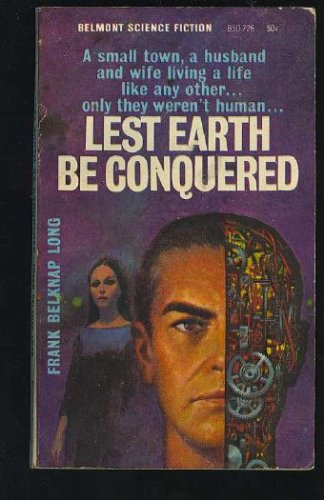 
If aliens were planning to invade Earth, would they send ships full of green-skinned monsters, with guns blazing? Perhaps they would take their time and infiltrate Earth, altered to look and act human, working to undermine Earth from the "inside."

Bobby Jackson looks like your average teenager in Anytown, USA (but he really isn't). He has his suspicions about the Martin's, a married couple that just moved in next door. It's as if they are trying too hard to fit in. He sees Mrs. Martin at the local supermarket, holding a tomato like she has never seen one before in her life. No one knows just what Mr. Martin does for a living. Invited into the house for a glass of lemonade, while staring into Mrs. Martin's eyes, Bobby suddenly finds his consciousness transferred into a neighborhood cat that wandered into the house.

Bobby's intellectual abilities (his IQ is 150, but he doesn't act like a genius) have gotten Mr. Dyson, his teacher, very curious and a little spooked. After an encounter at the town library, where it seems as if Bobby has been telepathically communicating with Laura Hartley, the town librarian, she sees another man in the library re-arrange his face. She was not supposed to see that, so, soon afterwards, she is kidnapped by unseen forces, right through a blank wall. Bobby also talks to a local encyclopedia salesman, who, soon after ringing the doorbell at the Martin's, and hearing things he shouldn't have heard, finds his consciousness switched with that of a local cat.

The focus shifts to a complex of caves on the edge of town, where Bobby brings Mr. Dyson (with help from a telepathic suggestion planted in Mr. Dyson's brain). There they find "the Martin's", along with four other town residents who are not exactly what they seem to be.

This book is surprisingly good. It's a "quiet" tale of alien invasion, with real characters, that does a fine job of keeping the reader's interest.