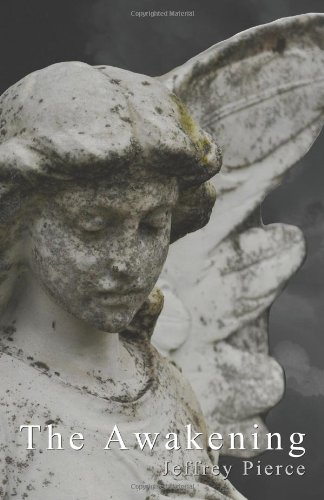 First of a trilogy, this is a dark suspense/horror novel about the end of the world.

Drew is your average 21st century computer geek. He runs into Alicia at a local club, and recognizes her from his dreams. She is one of the Old Ones, an ancient, immortal race of beings who come from somewhere else. The reason that Drew recognizes Alicia is that, as he learns later, he is of the bloodline; he has some of the blood of the Old Ones in him. They move in together, and fall in love. Evil forces, led by a being named Lotomas, are coming after them, so they head for an isolated spot in eastern Montana to decide on their next move.

A disparate group of people, from all walks of life, join them in Montana. The only thing they have in common is that they have all had the same kind of strange dreams; they are all of the bloodline. Things end very badly for the group; Lotomas and his minions don't just kill them; their souls are also stolen. Alicia "saves" Drew by placing her hands on his chest, stopping his heart, and sending his soul to the afterlife. Alicia finds herself in a place called Ahnnchalla, a dark and dismal place with corpses as far as the eye can see.

Meantime, an angel named Nathaniel, woken after a 200-year sleep, and Jenny, a teenage girl who is also of the bloodline, arrive in Montana just after the slaughter. Being questioned by the police would be very bad, so they take off and hole up in a motel room, where Nathaniel has Jenny do some Internet searching. The intention of Lotomas is to make Earth part of Ahnnchalla. If the contemporary societal threads that will lead to such a thing can be found ahead of time, perhaps they can be pulled the right way to prevent it from happening. Humans are good at seeing the threads after a thing has happened, but have a tough time at putting things together ahead of time. Jenny finds plenty of possibilities on the Internet: war, poverty, racism, etc. When people talk about the "end of the world," it doesn't necessarily mean the destruction of Earth. Something like the world's climate going haywire, or some sort of bio-war will radically change the world for those who survive.

Do Drew and Alicia get back together, in any form? Can Jenny find the right societal threads to pull to prevent the end of the world? The writing in this book borders on amazing. It will give the reader plenty to consider, about theology and society in general. There's also a really good story here. I am not much of a horror reader, so I was glad that the horror parts were not overwhelming. This gets two strong thumbs up.