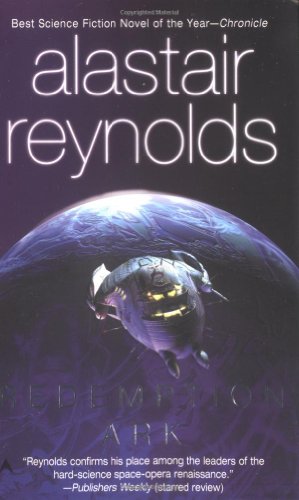 
Part of the author's Revelation Space series, this book is set approximately 600 years from now, after mankind has started to spread throughout the galaxy.

Human activities have attracted the attention of the Inhibitors, alien machines whose mission seems to be the elimination of all intelligent life. They have come to the star Delta Pavonis, home to the planet Resurgam, populated by over 200,000 people. The Inhibitors start to systematically take apart the system's gas giant, plus several of its moons, in order to build an immense device of unknown capability (imagine if Jupiter and several of its moons were systematically taken apart, and a growing alien device could be seen every night in the sky). Whatever it is, it's not good for the people of Resurgam.

An attempt is made to evacuate the people of Resurgam, a few hundred at a time, onto a ship called Nostalgia for Infinity, to take them to another system. Years ago, the ship's captain, John Brannigan, became a victim of the Melding Plague. He was put into cryogenic sleep to try to slow the effects of the plague; it did not work for long. Now, Captain Brannigan has become the ship.

The ship also contains a number of huge cache weapons, some of which can be measured in kilometers. They are the only thing which can possibly stop the Inhibitors; they are not called "hell-class weapons" for nothing. Several factions want those weapons for their own purposes, including a renegade named Clavain. The weapons themselves may have other ideas. If the Inhibitors are not stopped now, it won't take long, in cosmic terms, for them to find Earth.

This is a wonderful piece of writing. Normally, I would look at a 700-page paperback book and say No Thanks; not when Alastair Reynolds is the author. He does a fine job from start to finish, writing on a grand millions-of-years scale. For those who like mind-blowing storytelling, this is very much recommended.