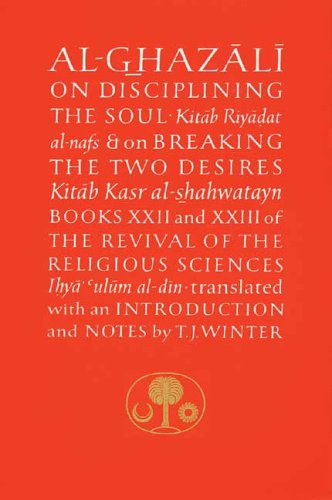 Al-Ghazali On Disciplining The Soul And On Breaking The Two Desires: Books Xxii And Xxiii Of The Revival Of The Religious Sciences (Ghazali Series) (Bk. 22 & 23)
by Abu Hamid Muhammad Al-Ghazali

The spiritual life in Islam begins with riyadat al-nafs, the inner warfare against the ego. Distracted and polluted by worldliness, the lower self has a tendency to drag the human creature down into arrogance and vice. Only by a powerful effort of will can the sincere worshipper achieve the purity of soul which enables him to attain God's proximity. This translation of two chapters from The Revival of the Religious Sciences (Ihya' 'Ulum al-Din) details the sophisticated spiritual techniques adopted by classical Islam. In the first step, On Disciplining the Soul, which cites copious anecdotes from the Islamic scriptures and biographies of the saints, Ghazali explains how to acquire good character traits, and goes on to describe how the sickness of the heart may be cured. In the second part, Breaking the Two Desires, he focusses on the question of gluttony and sexual desire, concluding, in the words of the Prophet, that 'the best of all matters is the middle way'. The translator has added an introduction and notes which explore Ghazali's ability to make use of Greek as well as Islamic ethics. The work will prove of special interest to those interested in Sufi mysticism, comparative ethics, and the question of sexuality in Islam.