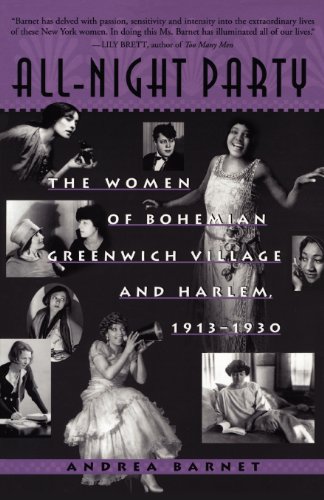 All-Night Party: The Women Of Bohemian Greenwich Village And Harlem, 1913-1930
by Andrea Barnet

They were smart. Sassy. Daring. Exotic. Eclectic. Sexy. And influential. One could call them the first divas--and they ran absolutely wild. They were poets, actresses, singers, artists, journalists, publishers, baronesses, and benefactresses. They were thinkers and they were drinkers. They eschewed the social conventions expected of them--to be wives and mothers--and decided to live on their own terms. In the process, they became the voices of a new, fierce feminine spirit. There's Mina Loy, a modernist poet and much-photographed beauty who traveled in pivotal international art circles; blues divas Bessie Smith and Ethel Waters; Edna St. Vincent Millay, the lyric poet who, with her earthy charm and passion, embodied the '20s ideal of sexual daring; the avant-garde publishers Margaret Anderson and Jane Heap; and the wealthy hostesses of the salons, A'Lelia Walker and Mabel Dodge. Among the supporting cast are Emma Goldman, Isadora Duncan, Ma Rainey, Margaret Sanger, and Gertrude Stein. Andrea Barnet's fascinating accounts of the emotional and artistic lives of these women--together with rare black-and-white photographs, taken by photographers such as Berenice Abbott and Man Ray--capture the women in all their glory. This is a history of the early feminists who didn't set out to be feminists, a celebration of the rebellious women who paved the way for future generations.