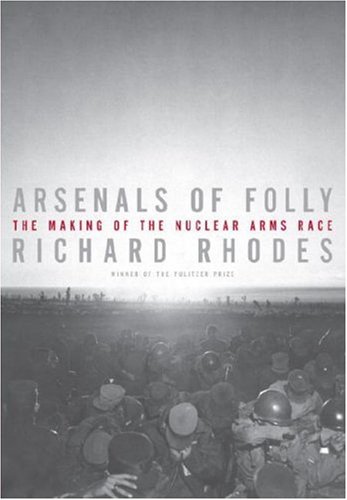 Arsenals Of Folly: The Making Of The Nuclear Arms Race
by Richard Rhodes

From the Pulitzer Prize–winning author of The Making of the Atomic Bomb: the story of the entire postwar superpower arms race, climaxing during the Reagan-Gorbachev decade when the United States and the Soviet Union came within scant hours of nuclear war—and then nearly agreed to abolish nuclear weapons.In a narrative that reads like a thriller, Rhodes reveals how the Reagan administration’s unprecedented arms buildup in the early 1980s led ailing Soviet leader Yuri Andropov to conclude that Reagan must be preparing for a nuclear war. In the fall of 1983, when NATO staged a larger than usual series of field exercises that included, uniquely, a practice run-up to a nuclear attack, the Soviet military came very close to launching a defensive first strike on Europe and North America. With Soviet aircraft loaded with nuclear bombs warming up on East German runways, U.S. intelligence organizations finally realized the danger. Then Reagan, out of deep conviction, launched the arms-reduction campaign of his second presidential term and set the stage for his famous 1986 summit meeting with Gorbachev in Reykjavik, Iceland, and the breakthroughs that followed.Rhodes reveals the early influence of neoconservatives and right-wing figures such as Richard Perle, Donald Rumsfeld, Dick Cheney, and Paul Wolfowitz. We see how Perle in particular sabotaged the Reykjavik meeting by convincing Reagan that mutual nuclear disarmament meant giving up his cherished dream of strategic defense (the Star Wars system). Rhodes’s detailed exploration of these and other events constitutes a prehistory of the neoconservatives, demonstrating that the manipulation of government and public opinion with fake intelligence and threat inflation that the administration of George W. Bush has used to justify the current “war on terror” and the disastrous invasion of Iraq were developed and applied in the Reagan era and even before.Drawing on personal interviews with both Soviet and U.S. participants, and on a wealth of new documentation, memoir literature, and oral history that has become available only in the past ten years, Rhodes recounts what actually happened in the final years of the Cold War that led to its dramatic end. The story is new, compelling, and continually surprising—a revelatory re-creation of a hugely important era of our recent history.