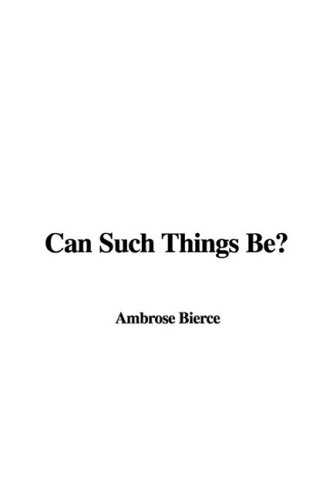 Can Such Things Be?
by Ambrose Bierce

Ambrose Gwinnett Bierce (1842-1914) was an American editorialist, journalist, short-story writer and satirist, today best known for his The Devil's Dictionary (1911). He wrote some of his books under the pseudonyms Dod Grile and J. Milton Sloluck. Bierce's lucid, unsentimental style has kept him popular when many of his contemporaries have been consigned to oblivion. His dark, sardonic views and vehemence as a critic earned him the nickname, "Bitter Bierce." Such was his reputation that it was said his judgment on any piece of prose or poetry could make or break a writer's career. His short stories are considered among the best of the 19th century, providing a popular following based on his roots. He wrote realistically of the terrible things he had seen in the war in such stories as An Occurrence at Owl Creek Bridge, Killed at Resaca, and Chickamauga. His works include: The Fiend's Delight (1873), Cobwebs from an Empty Skull (1874), Black Beetles in Amber (1892), Fantastic Fables (1899), Shapes of Clay (1903), A Son of the Gods, and A Horseman in the Sky (1907), Write It Right (1909) and A Cynic Looks at Life (1912).