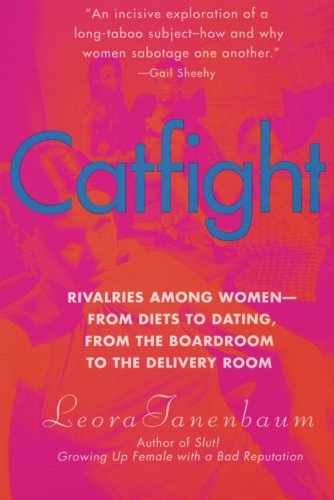 Catfight: Rivalries Among Women--From Diets To Dating, From The Boardroom To The Delivery Room
by Leora Tanenbaum

Women often behave toward one another in sneaky, underhanded, ruthlessly competitive ways. Catfight is a remarkably researched and insightful foray into the American woman's world of aggression, rivalry, and competition. Tanenbaum draws on real-life examples and the most important studies to date in psychology, human aggression, psychoanalytic theory, and social movements to uncover the pressures that leave women regarding one another as adversaries rather than allies. Most women highly value female approval and friendship, but the darker side of sisterhood can evoke covertly competitive behavior: A career woman quits to become a full-time mom. Although she misses her job and the income, she belittles you, a working mother, as selfishly unconcerned with your children's welfare. You're at a party in mid-conversation with your boyfriend when an attractive woman comes over to mingle. You move closer to him, touching him and glaring at her. A female colleague "accidentally" misplaces your files and "forgets" to e-mail you about an important upcoming meeting. What is the state of "sisterhood" today? And how much progress have we really made?