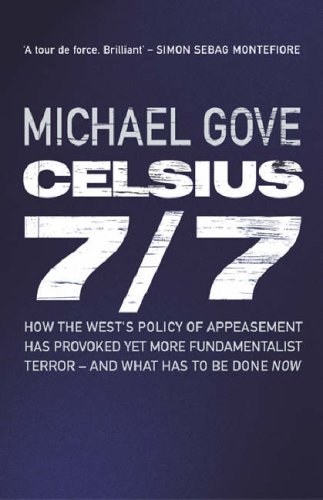 Times columnist Michael Gove, is one of Britain's leading writers and thinkers on terrorism and foreign affairs. In his column which appeared in the Times on the morning of 9/11, he prophetically argued that the West's policy of appeasement towards terror was destined to provoke yet greater atrocities. In Celsius 7/7, Gove explores the roots of Islamic rage, the historical factors which culminated in the current terrorist campaign and the Moslem world's troubled accommodation with modernity. He also analyses the intellectual roots and political appeal of Islamism, explains the factors behind Jihadi violence and places the current fundamentalist challenge in context. Combining a broad historical sweep with character sketches of key figures such as Michel Aflaq, Charles de Gaulle, Sayyhid Qutb, Donald Rumsfeld, Abu Musab al_Zarqawi, Henry Kissinger and Osama bin Laden, as well as a detailed survey of Western political failures, Gove's account is a shrewd and detached analysis that provides powerfully convincing recommendations for future action.