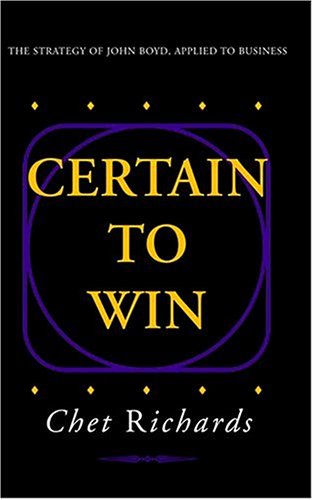 Certain To Win
by Chet Richards

Advance reviews of "Certain to Win "Certain to Win Sun Tzu4s prognosis for generals who follow his advice develops the strategy of the late US Air Force Colonel John R. Boyd for the world of business. Robert Coram's monumental biography, "Boyd, the Fighter Pilot Who Changed the Art of War, rekindled interest in this obscure pilot and documented his influence on military matters ranging from the design of the F-15 and F-16 fighters to the planning for Operation Desert Storm to the execution of Operation Iraqi Freedom. Unfortunately Boyd's written legacy, consisting of a single paper and a four-set cycle of briefings, addresses strategy only in war. All Boyd4s briefings are available on" Defense and the National Interest. Boyd and Business Boyd did study business. He read everything he could find on the Toyota Production System and came to consider it as an implementation of ideas similar to his own. He took business into account when he formulated the final version of his "OODA loop" and inhis last major briefing, "Conceptual Spiral, on science and technology. He read and commented on early versions of this manuscript, but he never wrote on how business could operate more profitably by using his ideas. Other writers and business strategists have taken up the challenge, introducing Boyd's concepts and suggesting applications to business. Keith Hammonds, in the magazine "Fast Company, George Stalk and Tom Hout in "Competing Against Time, and Tom Peters most recently in "Re-imagine! have described the OODA loop and its effects on competitors. They made significan