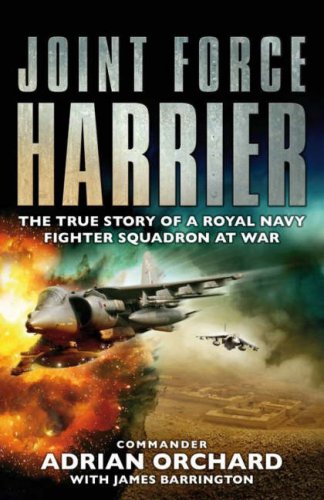 Afghanistan, October 2006: British soldiers are engaged in the most intense, sustained fighting they'd faced since the hell of the Korean War. Against a fierce, experienced and frighteningly motivated enemy, their lives too often depended on the success of danger-close, pin-point attacks pressed home from the air. But what most people back home didn't know was that, during that violent winter, those attacks were being flown by the Royal Navy. When 800 Naval Air Squadron - call sign 'Recoil' - arrived in theatre, their Boss, Commander Adrian Orchard, knew there could be no slip ups. Day and night, the Fleet Air Arm crews were on constant alert, ready to scramble their heavily armed Harrier jets at a moment's notice in support of the men on the ground. The call wasn't slow in coming. Just fifteen minutes after getting airborne for the first time, Orchard and his wingman were in the thick of it, called in after an Apache helicopter gunship was forced back by heavy fire. The first book written by a serving British fast jet pilot since the 1991 Gulf War, Joint Force Harrier offers an unprecedented, heart-stopping insight into the realities of modern air warfare. The complexity and sophistication of the equipment may have moved on since the epic air battles of WWII, but, it's clear that the courage, skill and character of the men engaged in this struggle for a country's survival has not.