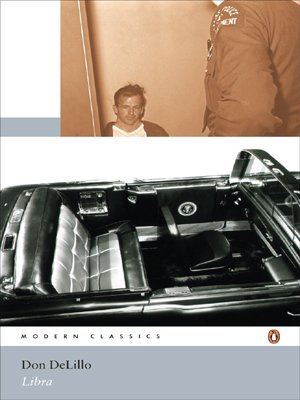 An unparalleled work of historical conjecture, ranging imaginatively over huge tracts of the American popular consciousness, Don DeLillo's Libra contains an introduction by the author in Penguin Modern Classics. In this powerful, eerily convincing fictional speculation on the assassination of President John F. Kennedy, Don DeLillo chronicles Lee Harvey Oswald's odyssey from troubled teenager to a man of precarious stability who imagines himself an agent of history. When "history" presents itself in the form of two disgruntled CIA operatives who decide that an unsuccessful attempt on the life of JFK will galvanize the nation against Communism, the scales are irrevocably tipped. Don DeLillo (b.1936) was born and raised in New York City. Americana (1971), his first novel, announced the arrival of a major literary talent, and the novels that followed confirmed his reputation as one of the most distinctive and compelling voices in late-twentieth-century American fiction. DeLillo's comic gifts come to the fore in White Noise (1985), which won the National Book Award, Underworld (1997), hailed by Martin Amis as 'the ascension of a great writer', Cosmopolis (2003), adapted into a film by David Cronenberg, due to be released later this year, and Falling Man (2007), a novel about the aftereffects of the 9/11 terrorist attacks in New York.If you enjoyed Libra, you might like DeLillo's Americana, also available in Penguin Modern Classics.'Don DeLillo's apocalyptic imagination takes on the assassination of John F. Kennedy... Breathtaking' Newsday