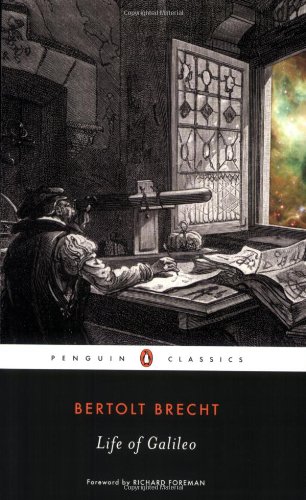 "Life of Galileo (German : Leben des Galilei), also known as Galileo, is a play by the twentieth-century German dramatist Bertolt Brecht. The first version of the play was written between 1937 and 1939; the second (or 'American') version was written between 1945-1947, in collaboration with Charles Laughton. The play received its first theatrical production at the Zurich Schauspielhaus, opening on 9 September 1943. This production was directed by Leonard Steckel, with set-design by Teo Otto. The cast included Steckel himself (as Galileo), Karl Paryla and Wolfgang Langhoff. The second version opened at the Coronet Theatre in Los Angeles on 30 July 1947. This was directed by Joseph Losey and Brecht, with set-design by Robert Davison. Laughton played Galileo, with Hugo Haas as Barberini and Frances Heflin as Virginia. This production opened at the Maxine Elliott's Theatre in New York on 7 December of the same year. A third production, by the Berliner Ensemble with Ernst Busch in the title role, opened in January 1957 at the Theater am Schiffbauerdamm and was directed by Erich Engel, with set-design by Caspar Neher. The play was first published in 1940"--Www.ulike.net (Nov. 8, 2010).