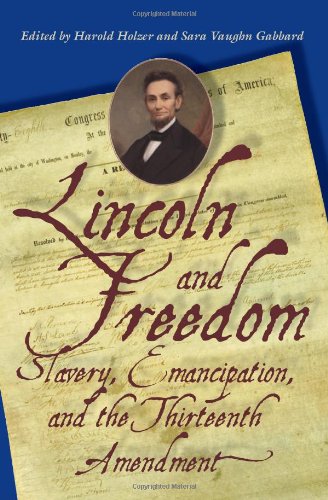 Lincoln’s reelection in 1864 was a pivotal moment in the history of the United States. The Emancipation Proclamation had officially gone into effect on January 1, 1863, and the proposed Thirteenth Amendment had become a campaign issue. Lincoln and Freedom: Slavery, Emancipation, and the Thirteenth Amendment captures these historic times, profiling the individuals, events, and enactments that led to slavery’s abolition. Fifteen leading Lincoln scholars contribute to this collection, covering slavery from its roots in 1619 Jamestown, through the adoption of the Constitution, to Abraham Lincoln’s presidency. This comprehensive volume, edited by Harold Holzer and Sara Vaughn Gabbard, presents Abraham Lincoln’s response to the issue of slavery as politician, president, writer, orator, and commander-in-chief. Topics include the history of slavery in North America, the Supreme Court’s Dred Scott decision, the evolution of Lincoln’s view of presidential powers, the influence of religion on Lincoln, and the effects of the Emancipation Proclamation. This collection effectively explores slavery as a Constitutional issue, both from the viewpoint of the original intent of the nation’s founders as they failed to deal with slavery, and as a study of the Constitutional authority of the commander-in-chief as Lincoln interpreted it. Addressed are the timing of Lincoln’s decision for emancipation and its effect on the public, the military, and the slaves themselves. Other topics covered include the role of the U.S. Colored Troops, the election campaign of 1864, and the legislative debate over the Thirteenth Amendment. The volume concludes with a heavily illustrated essay on the role that iconography played in forming and informing public opinion about emancipation and the amendments that officially granted freedom and civil rights to African Americans. Lincoln and Freedom provides a comprehensive political history of slavery in America and offers a rare look at how Lincoln’s views, statements, and actions played a vital role in the story of emancipation.