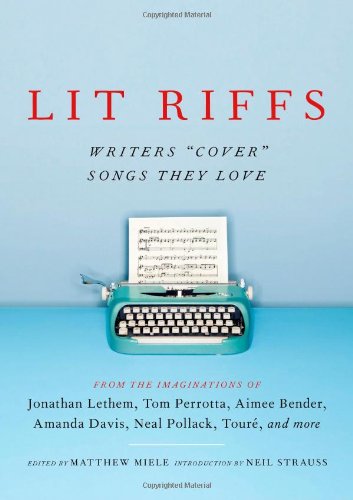 Following in the footsteps of the late great Lester Bangs -- the most revered and irreverent of rock 'n' roll critics -- twenty-four celebrated writers have penned stories inspired by great songs. Just as Bangs cast new light on a Rod Stewart classic with his story "Maggie May," about a wholly unexpected connection between an impressionable young man and an aging, alcoholic hooker, the diverse, electrifying stories here use songs as a springboard for a form dubbed the lit riff. Alongside Bangs's classic work, you'll find stories by J.T. LeRoy, who puts a recovering teenage drug abuser in a dentist's chair with nothing but the Foo Fighters's "Everlong" -- blaring through the P.A. -- to fight the pain; Jonathan Lethem, whose narrator looks back on his lost innocence just as an extramarital affair careens to an end -- this to the tune "Speeding Motorcycle" as recorded by Yo La Tengo; and Jennifer Belle, who envisions a prequel to Paul Simon's "Graceland" -- one that takes place at a children's birthday party replete with a real live kangaroo. With original contributions from Tom Perrotta, Nelson George, Amanda Davis, Lisa Tucker, Aimee Bender, Darin Strauss, and many more -- riffing on everyone from Tom Waits and Bruce Springsteen to the White Stripes, Cat Power, and Bob Marley -- this is both an astounding collection of short stories and an extraordinary experiment in words and music. Soundtrack available from Saturation Acres Music & Recording Co.