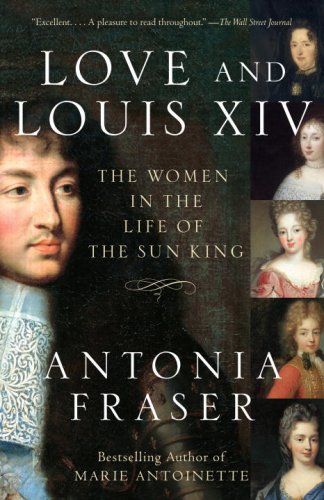 Love And Louis Xiv: The Women In The Life Of The Sun King
by Antonia Fraser

Louis XIV, the highly-feted “Sun King”, was renowned for his political and cultural influence and for raising France to a new level of prominence in seventeenth-century Europe. And yet, as Antonia Fraser keenly describes, he was equally legendary in the domestic sphere. Indeed, a panoply of women — his wife Anne; mistresses such as Louise de la Vallière, Athénaïs de Montespan, and the puritanical Madame de Maintenon; and an array of courtesans — moved in and out of the court. The highly visible presence of these women raises many questions about their position in both Louis XIV’s life and in France at large. With careful research and vivid, engaging prose, Fraser makes the multifaceted life of one of the most famous European monarchs accessible and vibrantly current. From the Trade Paperback edition.