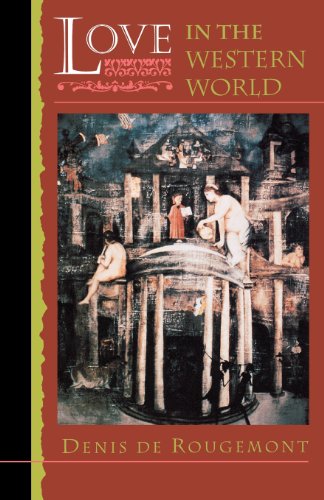 Love In The Western World
by Denis De Rougemont

In this classic work, often described as "The History of the Rise, Decline, and Fall of the Love Affair," Denis de Rougemont explores the psychology of love from the legend of Tristan and Isolde to Hollywood. At the heart of his ever-relevant inquiry is the inescapable conflict in the West between marriage and passion--the first associated with social and religious responsiblity and the second with anarchic, unappeasable love as celebrated by the troubadours of medieval Provence. These early poets, according to de Rougemont, spoke the words of an Eros-centered theology, and it was through this "heresy" that a European vocabulary of mysticism flourished and that Western literature took on a new direction. Bringing together historical, religious, philosophical, and cultural dimensions, the author traces the evolution of Western romantic love from its literary beginnings as an awe-inspiring secret to its commercialization in the cinema. He seeks to restore the myth of love to its original integrity and concludes with a philosophical perspective on modern marriage.