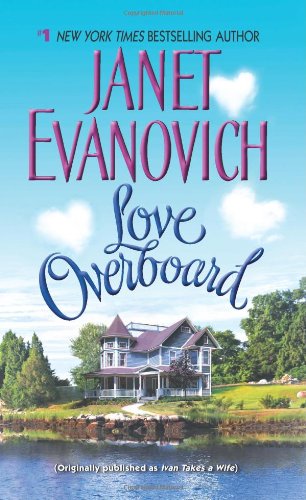 Dear Reader: In a previous life, before the time of Plum, I wrote twelve short romance novels. Red-hot screwball comedies, each and every one of them. Nine of these stories were originally published by the Loveswept line between the years 1988 and 1992. All went out-of-print immediately and then could be found only at used bookstores and yard sales. I'm excited to tell you that those nine stories are now being re-released by HarperCollins. Love Overboard is second in the lineup, and it's presented here in almost original form. I've done only minor editing to correct some embarrassing bloopers missed the first time around. And I changed the title because I thought the original title (Ivan Takes a Wife) was boring! Love Overboard is a romantic tale about a handsome ship's captain; a wary wench from Jersey City; a hundred-year-old, two-masted schooner; and an entire town of shoemakers. There's some getting naked, some blueberry pie, more getting naked, and at the end . . . Okay, I won't tell you about the end, but it's really good and it'll make you feel happy. I took my family on the road trip from heck to research this book. When we finally got to Maine it was all worthwhile because we fell in love with the boats and the people who sailed them. Enjoy!