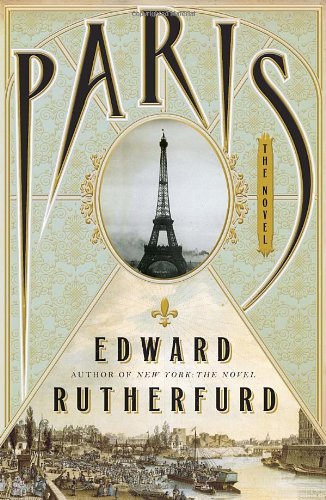 Paris: The Novel
by Edward Rutherfurd

From the grand master of the historical novel comes a dazzling epic portrait of Paris that leaps through centuries as it weaves the tales of families whose fates are forever entwined with the City of Lights As he did so brilliantly in London: The Novel and New York: The Novel, Edward Rutherfurd brings to life the most magical city in the world: Paris. This breathtaking multigenerational saga takes readers on a journey through thousands of years of glorious Parisian history—from its founding under the Romans to the timeless love story of Abelard and Heloise against the backdrop of the building of Notre Dame; to the martyrdom of Joan of Arc during the Hundred Years War; to the dangerous manipulations of Cardinal Richelieu and the bloody religious conflicts between Catholics and Protestants; to the gilded glories of Versailles; to the horrors of the French Revolution and the conquests of Napoleon; to the beauty and optimism of the belle epoque when Impressionism swept the world; to the hotbed of cultural activity of the 1920s and '30s that included Picasso, Salvador Dali, Ernest Hemingway, and the writers of the Lost Generation; to the Nazi occupation and the incredible efforts of the French Resistance. Even more richly detailed, thrilling, and romantic then anything Rutherfurd has written before, Paris: The Novel illuminates thousands of years in the City of Lights through intimate and vivid tales of characters both fictional and true, and with them, the sights, scents, and tastes of Paris come to sumptuous life.