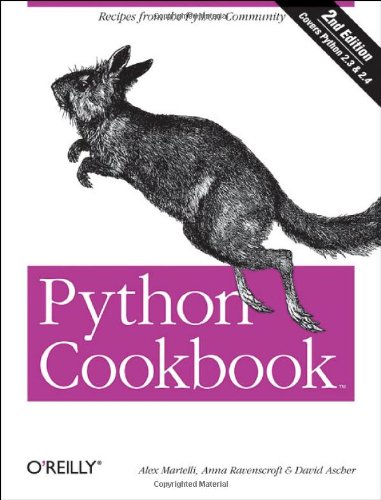 Portable, powerful, and a breeze to use, Python is the popular open source object-oriented programming language used for both standalone programs and scripting applications. It is now being used by an increasing number of major organizations, including NASA and Google. Updated for Python 2.4, The Python Cookbook, 2nd Edition offers a wealth of useful code for all Python programmers, not just advanced practitioners. Like its predecessor, the new edition provides solutions to problems that Python programmers face everyday. It now includes over 200 recipes that range from simple tasks, such as working with dictionaries and list comprehensions, to complex tasks, such as monitoring a network and building a templating system. This revised version also includes new chapters on topics such as time, money, and metaprogramming. Here's a list of additional topics covered: Manipulating text Searching and sorting Working with files and the filesystem Object-oriented programming Dealing with threads and processes System administration Interacting with databases Creating user interfaces Network and web programming Processing XML Distributed programming Debugging and testing Another advantage of The Python Cookbook, 2nd Edition is its trio of authors--three well-known Python programming experts, who are highly visible on email lists and in newsgroups, and speak often at Python conferences. With scores of practical examples and pertinent background information, The Python Cookbook, 2nd Edition is the one source you need if you're looking to build efficient, flexible, scalable, and well-integrated systems.