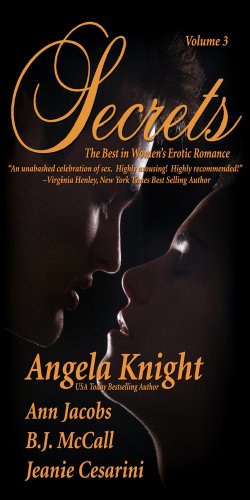 Jeanie Cesarini - The Spy Who Loved Me (Contemporary -Two FBI agents go undercover) In The Spy Who Loved Me, undercover FBI agent Paige Ellison Never dreamed she'd end up with a staring role in a filmed game of sexual role-playing and death. Paige's sexual appetites rise to new levels when she works with the leading man Christopher Sharp, the cunning agent who uses all his training to capture her body and heart. B.J. McCall - Love Undercover (Contemporary- Two police officers undercover) In Love Undercover, police lieutenant Amada Forbes finds herself in a sting operation at a strip joint. While she performs on stage, Detective"Cowboy" Cooper, as a bouncer, gets to watch. Though he excites her, she must fight the temptation to surrender to the passion. Angela Knight- Blood and Kisses (Future/Vampire-Woman mercenary chased by assassin) Blood and Kisses takes you into the future where vampires have their uses. The vampire assassin, Tagliar, is after the lovely Beryl St. Cloud. Her only hope lies with Decker, a vampire and ex-mercenary. Broke, she must use herself as payment for his services. Will his seductive powers overtake her very soul? Ann Jacobs - The Barbarian (Historical/Medieval-Lady and her castle given to victors) Lady Brianna resists being taken in The Barbarian. She and her castle are a reward from the king, but she vows not to surrender to the barbaric Giles, Earl of Harrow. He must use sexual arts learned in the infidels' harem to conquer his bride. Lust and love come together in this story. A word of caution-not for the fait of heart.