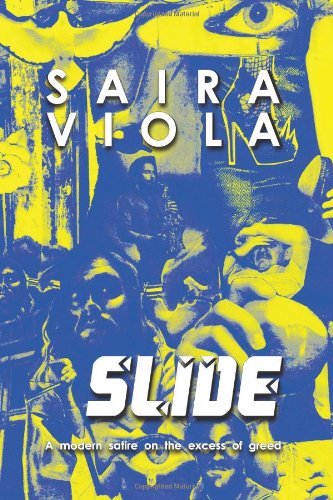 Slide, A Modern Satire On The Excess Of Greed
by Saira Viola

During the postmodern boom of Blairs Britain, two well-meaning drug dealers on the verge of becoming respectable businessmen become embroiled in a surreal gangster heist. Tony, a West London drug dealer, attempts to start a legitimate business around a new age herbal pill that provides natural highs. In order to secure the cash for their start up venture, he strikes a deal with a kooky English aristocrat. Their plans go askew, however, when Richard, their lawyer and long term friend, involves them in his own shady dealings. Richard acquires an international bearer bond worth $100 million which belongs to Poncho Khan, a notorious Indian Crime boss. In a time when mass consumerism and licentious hedonism are the dominant features of London society, the three men attempt to outsmart the drug king before they fall victim to their own depravity.