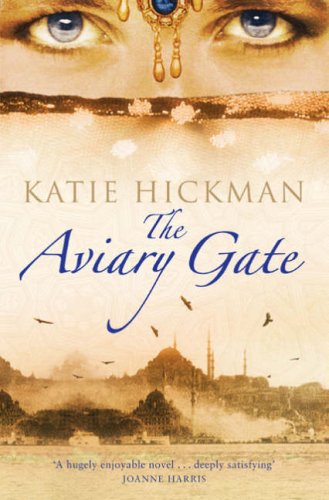 The Aviary Gate
by Katie Hickman

Elizabeth Stavely sits in the Bodleian library with trembling hands. Before her is a fragment of parchment which has about it a dusty fragrance of roses, of sadness and great age. Here is the clue she has been looking for, to a story that has been untold for four hundred years. It is as though a voice is whispering softly to her across the centuries. Constantinople, 1599: merchants from all over Europe are vying with each other to gain trading rights in the Ottoman empire. Paul Pindar, a wealthy merchant, has been entrusted with the mission to deliver an extraordinary musical clock to the Sultan. But a disaster has befallen it on its journey from England, and the organ-maker Thomas Dallam must attempt to repair the effects of the seawater on the precious artifact. Pindar is troubled too by a secret sadness: the woman he once loved is now lost to him, drowned in a shipwreck. But there have been rumours of a new young slave with golden hair and skin like milk, sighted behind the gates of the Sultan's harem. Could this be his Celia? Deep inside the most private quarters of the Sultan's palace, a different drama unfolds: Hassan Aga, the Chief Black Eunuch, lies spreadeagled and helpless, his life slowly ebbing away. Beside him is an intricate ship made of spun sugar, perhaps carrying the poison that is about to take his life. A veiled figure stands over him, and as she moves away the light catches the huge emerald on her finger, causing it to glow like a cat's eye. The Aviary Gate is a tale of ancient alliances and intrigues, of forbidden love and dangerous secrets. Lush, magical and utterly absorbing, it is a masterful novel from one of our most acclaimed authors.