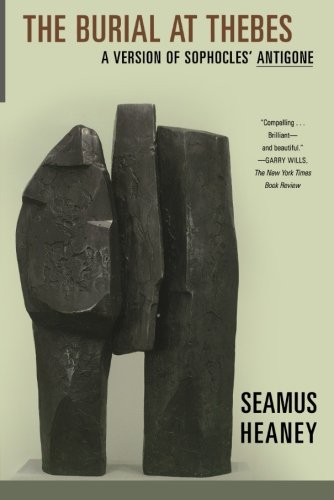 The Burial At Thebes: A Version Of Sophocles' Antigone
by Sophocles

Sophocles' play, first staged in the fifth century B.C., stands as a timely exploration of the conflict between those who affirm the individual's human rights and those who must protect the state's security. During the War of the Seven Against Thebes, Antigone, the daughter of Oedipus, learns that her brothers have killed each other, having been forced onto opposing sides of the battle. When Creon, king of Thebes, grants burial of one but not the "treacherous" other, Antigone defies his order, believing it her duty to bury all of her close kin. Enraged, Creon condemns her to death, and his soldiers wall her up in a tomb. While Creon eventually agrees to Antigone's release, it is too late: She takes her own life, initiating a tragic repetition of events in her family's history. In this outstanding new translation, commissioned by Ireland's renowned Abbey Theatre to commemorate its centenary, Seamus Heaney exposes the darkness and the humanity in Sophocles' masterpiece, and inks it with his own modern and masterly touch.