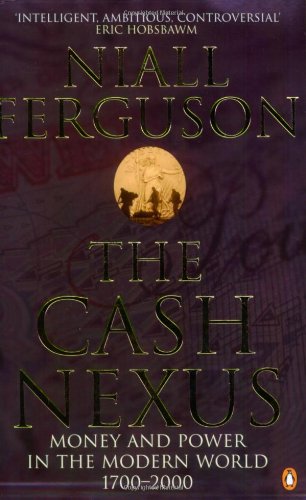 The Cash Nexus: Money And Power In The Modern World, 1700-2000
by Niall Ferguson

From the bestselling author of Empire, Niall Ferguson's The Cash Nexus is a dazzling, powerful and controversial explanation of modern world history and the fundamental force that lurks behind it all. Modern history shows that a nation's success largely depends on the way it manages its money. But where do money and politics meet? From 1700 to the present day, Niall Ferguson offers a bold and original analysis of the evolution of today's economic and political landscape. Far from being driven by the profit motive alone, our recent history, as Ferguson makes brilliantly clear, has also been made by potent and often conflicting human impulses - sex, violence and the desire for power. In the same style and manner that made The Pity of War an international bestseller, Niall Ferguson answers the big questions about finance and its crucial place in bringing happiness and despair, warfare and welfare, boom and crash to nations buffeted by the onward march of history. 'A marvellous combination of persuasion and provocation ... The Cash Nexus has enough ideas for a dozen books' Martin Daunton, History Today 'The Cash Nexus is ... packed with intriguing arguments and controversial propositions ... [an] outstanding book' Frank McLynn, Independent 'Ferguson is one of the most technically accomplished historians writing today ... The Cash Nexus offers an important corrective to the naïve story of economic growth' Robert Skidelsky, New York Review of BooksNiall Ferguson is one of Britain's most renowned historians. He is Laurence A. Tisch Professor of History at Harvard University, a Senior Research Fellow of Jesus College, Oxford and a Senior Fellow of the Hoover Institution, Stanford University. He is the bestselling author of Paper and Iron, The House of Rothschild, The Pity of War, The Cash Nexus, Empire, Colossus, The War of the World and The Ascent of Money.