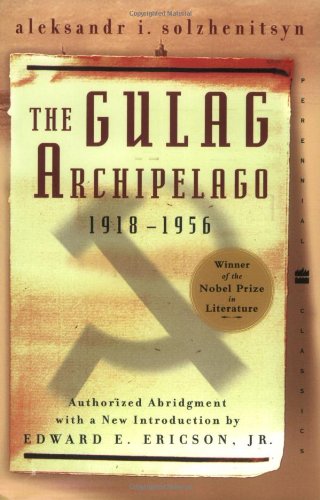 The Gulag Archipelago: 1918-1956
by Aleksandr I. Solzhenitsyn

Drawing on his own incarceration and exile, as well as on evidence from more than 200 fellow prisoners and Soviet archives, Aleksandr I. Solzhenitsyn reveals the entire apparatus of Soviet repression -- the state within the state that ruled all-powerfully. Through truly Shakespearean portraits of its victims -- men, women, and children -- we encounter secret police operations, labor camps and prisons; the uprooting or extermination of whole populations, the "welcome" that awaited Russian soldiers who had been German prisoners of war. Yet we also witness the astounding moral courage of the incorruptible, who, defenseless, endured great brutality and degradation. The Gulag Archipelago 1918-1956 -- a grisly indictment of a regime, fashioned here into a veritable literary miracle -- has now been updated with a new introduction that includes the fall of the Soviet Union and Solzhenitsyn's move back to Russia.