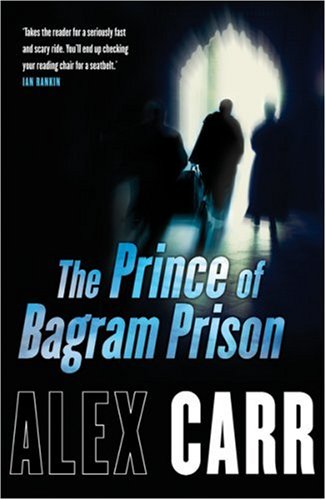 The Prince Of Bagram Prison
by Alex Carr

It's September 11th, 2004, three years after the attacks on the World Trade Center and the Pentagon. in Washington, D.C., Dick Morrow, retired spy chief and head of the Pentagon's Office of Special Plans, is grappling with his wife's imminent death. in Madrid, a CIA snitch - an eighteen year-old Moroccan boy named Jamal - is on the run after claiming to have seen the fugitive terrorist Hamid Bagheri. in London, former British special forces soldier Colin Mitchell is found dead in a train station bathroom, the victim of an apparent overdose. in Virginia, Colin's ex-lover, Katherine Caldwell, an Arabic specialist and Army Intelligence reservist, is unexpectedly called back to duty. Kat, who worked as an interrogator in Afghanistan, knows Jamal from the prison at Bagram Airbase, where he was held after being captured with a group of foreign fighters, one of whom was Bagheri. Kat's mission, which will take her from Madrid's red-light district to the slums of Casablanca, is clear: find the boy before Bagheri does.But when another member of Colin's special forces team is found dead, just days before the start of a court-martial to decide his responsibility in the death of one of the Bagram detainees, Kat begins to suspect that Jamal's safety may not be the primary concern for those who want him found. and when Jamal tracks down his reluctant former CIA handler, Harry Comfort, he not only puts himself in further danger, but rekindles a decades-old struggle between the man who can save him and the one who wants him dead.