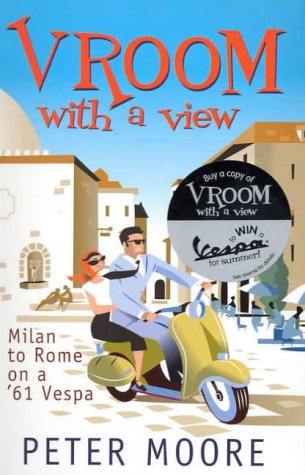 Vroom With A View : Milan To Rome On A '61 Vespa
by Peter Moore

After a late night Tai Bo fitness commercial warns him that his life will be over after 40, Peter Moore decides to pursue a boyhood dream sparked by watching old black and white movies of Sophia Loren riding motor scooters - to putt-putt around Italy on a 1960s Vespa, living la dolce vita. Of course, it couldn't be just any Vespa. With his 40th birthday approaching, Peter wanted a bike as old as he was and in the same condition - a little rough around the edges, but still going okay. And it had to have saddle seats. And a temperamental electrical system. And a little too much chrome. Basically the sort of motor scooter you'd see a young Marcello Mastroianni riding wearing a sharp suit and a pair of Ray Bans. From picnicking in the Italian alps to attempting to gate-crash Frances Mayes's villa and re-enacting 'Roman Holiday', VROOM WITH A VIEW is as much a romance as a travel adventure. Not only does Peter sweep the woman of his dreams off her feet, he falls in love with a side of Italy others rarely see, along with Sophia of course -