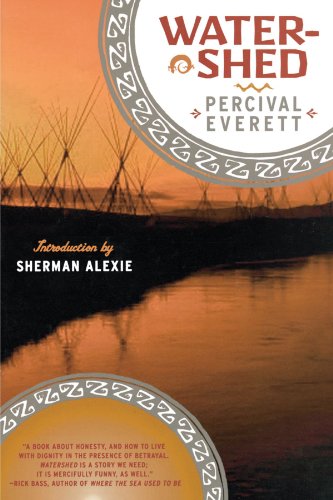 A rediscovered classic of politics,murder, espionage, for the first time in paperback On a windswept landscape somewhere north of Denver, Robert Hawks, a feisty and dangerously curious hydrologist, finds himself enmeshed in a fight over Native American treaty rights. What begins for Robert as a peaceful fishing interlude ends in murder and the disclosure of government secrets. Introduced by Sherman Alexie, who has taken a film option on the novel, this important novel is published in paperback for the first time. “Watershed has all the makings of a social thriller. Two FBI agents turn up dead in a local lake and a suspicious young Indian woman shows up soaking wet at the black hydrologist’s cabin door. Everett keeps the storytelling terse and intense, while at the same time broadening the scope of the book, moving into the history of U.S. Indian treaty making and into the science behind the search for water and the pathos of reservation life. In this novel about water and the struggle for a life free of injustice, the mix doesn’t just work, it flows.” —Alan Cheuse, National Public Radio “Precise and important, Watershed is a book about honesty, and how to live with dignity in the presence of betrayal. It is a story we need; it contains a code of action for the present and unfortunately for the near future. It is mercifully funny, as well.” —Rick Bass, author of Where the Sea Used to Be Percival Everett is the author of eleven novels including the recent Erasure, which won the inaugural Hurston/Wright Legacy Award for fiction. He lives with his wife on a small ranch and teaches at the University of Southern California, Los Angeles.