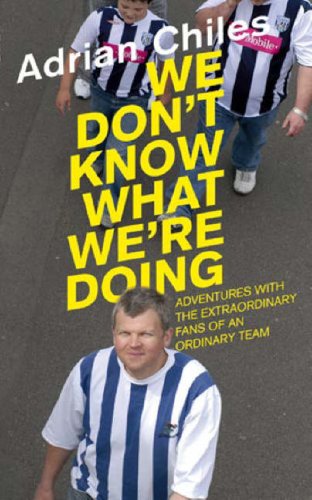 We Don't Know What We're Doing
by Adrian Chiles

Bill Shankly once said that for him football was more important than life and death. But Shankly was manager of a great Liverpool side - what about those less fortunate, who offer their undying support to their team through thin and thinner? One such is Adrian Chiles, MATCH OF THE DAY 2 presenter and lifelong fan of West Bromwich Albion, and a man who thinks about his team far more often than he thinks about sex.Following West Brom - a team that has known more troughs than peaks - over the course of a season, Chiles writes brilliantly about the passion for the Baggies that dominates his life ('If West Brom are doing well, I'm good company. I'm a nice colleague to have around, a good friend, a doting father, a loving husband. If, as is more often the case, we're doing badly, I'm none of the above'). Along the way he meets a quite remarkable cross-section of fellow fans, including one who has missed only five games since the Second World War and 'one-legged Kev', whose false limb once fell off while he was celebrating a goal scored against Wolves; while unhappy circumstances give him pause to consider the truth of Shankly's famous assertion.