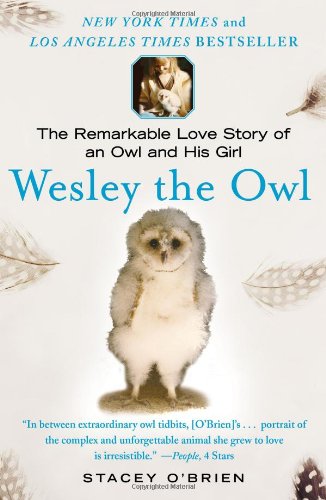 Wesley The Owl: The Remarkable Love Story Of An Owl And His Girl
by Stacey O'brien

This New York Times bestselling "sweet, quirky memoir" (USA TODAY) tells the "heartwarming story" (Publishers Weekly) of a biologist and the owl she rescued and raised. A book of unforgettable emotional resonance, Wesley the Owl took the book world by storm, with a 4-star review in People and a starred review in Publishers Weekly. Stacey O’Brien’s pioneering work about the emotional lives of owls is nothing less than enthralling. When adopted, Wesley could not have survived in the wild. O’Brien watches him turn into a voracious carnivore (eating up to six mice a day), an avid communicator with whom she develops a language all their own, and eventually, a robust adult who preens in the mirror and objects to visits by any other males to "his" house. She makes important discoveries along the way, and tells how the playful, reasoning, and loving creature she set out to save ended up saving her. Charting a unique partnership, Wesley the Owl is for animal lovers everywhere.