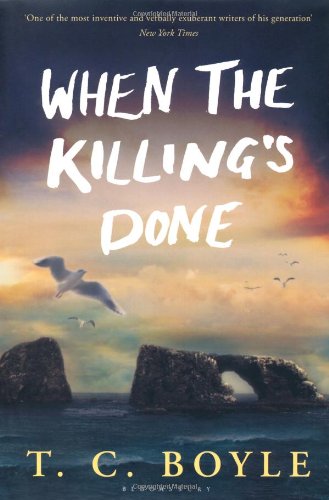 When The Killing's Done
by T. Coraghessan Boyle

‘How can you talk about being civil when innocent animals are being tortured to death? Civil? I'll be civil when the killing's done.' The island of Anacapa, off the coast of California, is overrun with black rats which are threatening the ancient population of ground-nesting birds. Alma Boyd Takesue of the National Park Service is the spokesperson for a campaign to exterminate these man-introduced rodents once and for all. Alma, highly self-disciplined with a stubborn streak, speaks as a conservationist, though the fact that her grandmother was once stranded on Anacapa for three weeks with nothing but thousands of crawling rats for company might explain some of her zeal. With days to go before the aerial rat-poisoning, Alma's plan is in danger of sabotage. Dave LaJoy and Anise Reed, a pair of notorious environmental activists, are recognisable from a distance by his knotted dreadlocks and her flame-red cyclone of hair. Dave is an electronics salesman with barely-controlled rages, for whom the plight of the rats is yet another of life's many injustices, along with lazy tramps and second-rate wine. Anise is a struggling folk singer with her own, terrible reasons for getting involved in ‘the cause'. From the outset, Alma, Dave and Anise are at ideological loggerheads. But when Alma's sights turn to the infestation of non-native pigs on Santa Cruz - where Anise was brought up by her single mother and a clan of ranchers - the stakes are raised, and the debate threatens to boil over into something much more real... When the Killing's Doneis T.C. Boyle's blistering new novel, a sweeping epic of family, ecology and the right to life - no matter what the fallout.