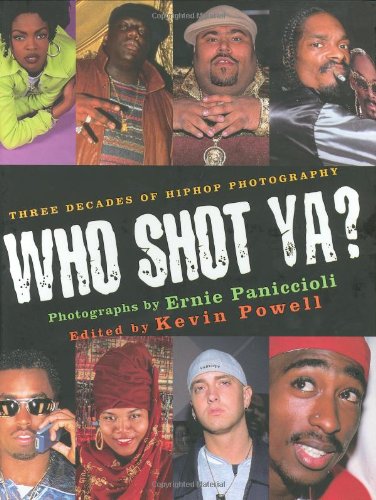 Who Shot Ya? Three Decades Of Hiphop Photography
by Kevin Powell, Ernie Paniccioli

Nearly thirty years ago, Ernie Paniccioli began photographing the graffiti art throughout New York City as well as the young people creating it. Armed with a 35-millimeter camera, Paniccioli literally recorded the beginning salvos of hip hop, today the most dominant youth culture on the planet. Be it Grandmaster Flash at the Roxy, a summer block party in the Bronx, the fresh faces of Queen Latifah and Will Smith, the cocksure personas of Tupac Shakur, The Notorious B.I.G., and Emimem, or the regal grace of Lauryn Hill, Ernie Paniccioli has been there to showcase hip hop's evolution much in the same way Gordon Parks recorded the Civil Rights Movement, or akin to the manner in which James Van Der Zee, the great photographer of Harlem in the 1920s, met the energy and spirit of his times. Who Shot Ya? Three Decades of Hip Hop Photography is the first major pictorial history of hip hop culture based around the work of one photographer. Culled from a vast archive, the approximately 150 images in Who Shot Ya? represent the visual diary of a generation, essentially following this socio-political art form from the streets of New York City to the billion-dollar global industry it has become. While some of these iconic renderings have graced the pages of magazines and fanzines through the years, most are published here for the first time.